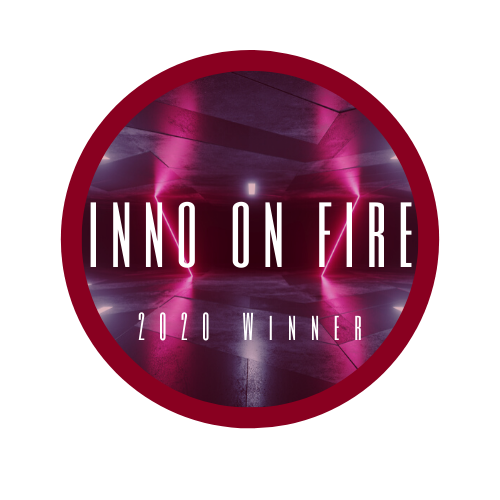 As published on American Inno.

Every story and newsletter published by Minne Inno seeks to highlight local individuals and businesses driving change in Minnesota. With our third annual Inno on Fire celebration, we want to shine a little extra light on the ones that are truly setting the scene on fire.

In the coming month leading up to Inno on Fire, we’ll be publishing stories about a handful of these fast-moving companies. We’ve already highlighted a few in the past, and will be sharing and updating those stories.

We invite you, your team, family, friends, or anyone interested in the Twin Cities tech, startup and innovation ecosystem to join us for a big party in August at Fueled Collective’s space in downtown Minneapolis.

At the event, we’ll announce a handful of people and/or companies that a panel of honorable judges has deemed to be the most “on fire.” These will be our Inno Blazers, and will receive a sweet prize along with eternal glory in the startup community.

So what are the exact qualifications for being on fire? Glad you asked. We sourced nominations from Beat readers and others in the community to find founders and companies that had a banner year. This could include new fundings, exciting partnerships or tireless support for the startup community. Then, we grouped them together in six categories.

It’s impossible to quantify a healthy, thriving ecosystem with one single metric, like job growth or revenue. An emerging hub is the result of, yes, fast-growing companies, but also of new funds, hard-working mentors, locally-focused investors, entrepreneurship professors, and many, many more.

A healthy ecosystem also reflects the breadth of innovation that’s happening in a particular market, not just in the tech sector but also in government, food, wellness and more. That’s why our Inno on Fire list is an eclectic list of people and companies from different industries and stages, representing all of the moving parts that make for an ecosystem that’s on fire.

Let’s get to know this year’s Inno on Fire!

Startup of the Year
The Coven: The Coven is a coworking company that provides workspace for women, non-binary and transgender professionals. Earlier this year, it opened the doors of a new office in St. Paul. The new office, twice the size of its original location in the North Loop, offers free parking, a prayer room, a beauty bar and on-site childcare. Last fall, CEO Alex West Steinman was recognized by Inc. Magazine as one of 100 women building America’s most innovative and ambitious businesses.

75F: Last year, Burnsville-based smart-energy startup 75F closed on an $18 million round of venture capital that included investment from a group of high-profile tech CEOs and a billionaire-backed investment fund. This was one of the 10 largest funding rounds for a Minnesota startup in 2019.

Total Expert: In October 2019, St. Louis Park-based fintech company Total Expert secured $52 million in Series C funding – one of the largest raises for a non-healthcare tech startup in recent years. The company was also recognized by Forbes as one of the 500 best startup employers in the U.S.

Women-Led Startup of the Year
Soona Studios: Soona offers photography and video services for professionals. The company, which now has 17 employees, has seen dramatic growth in recent months. It took over 200,000 photos in 2019 and more than half of those were in the fourth quarter of the year. In February, Soona closed on a $3.5 million round of seed funding.

Clinician Nexus: Minneapolis-based Clinician Nexus allows hospitals to post their clinical rotation schedules so that medical students can more easily apply for and schedule training. In 2019, it received $100,000 after getting accepted into the Cedars-Sinai Accelerator. The platform has more than 10,000 users and is used by over 50 hospitals across 11 states. In late 2019, Clinician Nexus raised a $1.5 million round of seed funding.

Abilitech Medical: Abilitech is creating a device that helps restore mobility to people with upper-limb and neuromuscular conditions. In October, the company won the Minnesota Cup, securing $50,000. It also landed $25,000 as the competition’s top women-led startup. And in December, Abilitech closed on $7.4 million in funding to support the commercialization of Assist.

Yonder: Yonder is an app that aims to decrease dental anxiety in young children using mixed reality and a cartoon hippo named Mimi. The company creates special apps for each dentistry practice it works with, offering patients and their parents actual footage of the office they’ll visit and the dentist they’ll see. Yonder was recently accepted into Lunar Startups’ third cohort.

Creatively Focused: Creatively Focused aims to increase the retention of special education teachers by providing them with vital coaching and professional development tools. It has launched its program in 30 Minnesota school districts, including Anoka-Hennepin, the state’s largest school system.

BetterYou: BetterYou is a digital coaching app designed to help users track and take back their free time. In the last year, BetterYou added 24 paying customers and helped thousands of students make better health decisions. The company also raised $1 million in seed financing at the end of 2019, bringing its total funding to $1.4 million.

Visana Health: Visana launched its digital care program for endometriosis and menstrual paid six months after being formed, and is already used by physicians at Mayo Clinic, Medical College of Wisconsin, University of North Carolina and other health systems. They’re also part of the new gBETA Medtech cohort.

TackleBar: St. Paul-based TackleBar announced in early 2020 that it had cemented a partnership with USA Football, the national governing body for amateur football in the U.S., to teach players proper tackling fundamentals that would reduce injuries. TackleBar is now the preferred limited-contact training tool for USA Football’s new Football Development Model, meaning the organization will incorporate the TackleBar harness into its national training program.

AirSelfie: AirSelfie is the creator of Air Pix, a small camera that allows users to take aerial photographs. The company raised $2.1 million through crowdfunding in the last 12 months. It also launched auto-fly technology, which enables users to take an aerial selfie without a controller.

Vemos: Vemos is a payments and analytics solution for the hospitality industry. The company was the runner up in the first MEDA Million Dollar challenge and has received investment from Rise of the Rest. In 2019, Vemos grew from 345 customers to 1,582 customers nationally.

Growth Stage
Companies with strong product-market fit, have grown to over 10 employees or are post-Series A

ClickSWITCH: ClickSWITCH makes it easy to switch direct deposits and automatic payments when changing from one financial institution to another. Last year, it raised a $13 million Series B round of funding. The company more than doubled its headcount in 2019, and now has over 50 employees in its new North Loop office.

Plyo: Plyo rewards students for exercising on campus. Since the beginning of 2019, the company has expanded from one campus to 11 markets and 15 campuses. It has also increased its user base from 4,000 to 45,000 students. The app also surpassed one million hours of exercise in November 2019, then hit two million hours in February 2020.

Dispatch: Dispatch is a B2B delivery startup. Within the last year, Dispatch has expanded its national reach and is now in a total of 30 U.S. markets. It plans to expand into 20 additional markets this year. The company also was recognized on the CNBC Upstart 100 list.

StemoniX: StemoniX, a biotech startup using stem cells to create micro-organs for drug testing and development, raised $14.4 million in early 2019. This was one of the largest venture capital rounds for a Minnesota company in 2019.

Kaleidoscope: Kaleidoscope offers a platform for managing private scholarships and grants. In March 2020, Kaleidoscope announced that it had secured a $3 million round of funding from Rally Ventures.

Civic Eagle: Founded in 2015, Civic Eagle aims to use technology to improve transparency in public policy and legislative affairs. In January 2020, the company announced that it had closed on a $1.3 million round of seed funding. In the fall, Civic Eagle was awarded $200,000 as one of three winners of MEDA’s Million Dollar Challenge.

Silicon Prairie Portal & Exchange: Fintech startup Silicon Prairie has helped a dozen Minnesota companies raise more than $6 million in capital, including $350,000 for itself using its own investment crowdfunding platform.

Launch Minnesota: Launch MN, an initiatives from the Minnesota Department of Employment and Economic Development, was established in 2019 to foster innovation across the state with a special focus on businesses located outside the Twin Cities. In less than a year, it has awarded thousands of dollars in grants to Minnesota startups and created a network of Innovation Hubs throughout the state to provide resources to entrepreneurs in Greater Minnesota.

Finnovation Lab: Launched in 2018, Finnovation Lab offers resources, training, workspace and support to social impact entrepreneurs. Over the course of a nine-month program, it provides its fellows with a $50,000 grant to help grow their businesses.

BanQu: BanQu aims to lift people out of extreme poverty by connecting them to global supply chains. By allowing the unbanked or underbanked interact with the global economy, BanQu helps these individuals develop a credit history and economic identity. Founded in 2015, BanQu has already cemented partnerships with several large international businesses, including Anheuser-Busch InBev, the world’s largest brewing company. In June 2018, BanQu began a pilot program with ABInBev, working to connect 2,000 Zambian farmers to BanQu’s mobile platform.

We Sparkle: We Sparkle is a social enterprise platform that uses AI-powered software to help small businesses care for both their customers and their communities. Founder and CEO Michelle Maryns was part of the first Finnovation Fellowship and recently joined BETA’s latest cohort. It is also part of Lunar Startups recently-launched third cohort. We Sparkle won the Impact Ventures division of the 2019 Minnesota Cup, securing $30,000 in funding.

Footprint Project: Created by a group of philanthropy, humanitarian and human rights veterans, this local organization deploys to disaster zones and low-resource communities around the world to provide relief and recovery services. Footprint helps these places rebuild with clean energy technologies like renewable microgrids, water filtration and safe shelters.

Ecotone Analytics: Ecotone works with businesses, government, education, nonprofits and social enterprises to account for the impact their work creates, and to communicate the value of that impact to investors and stakeholders.

PCs for People: PCs for People recycles electronics from businesses and provides refurbished tech to low-income individuals and nonprofits. The organization has distributed more than 80,000 computers across the country and provided over 30,000 families with internet access. To date, it has recycled more than 3.5 million pounds of technology that would have otherwise been discarded.

Opportunity Challenge
Those providing resources and support to underrepresented founders

ConnectUP!: Through its annual conference, ConnectUP connects local investors, innovators and other members of the business community to co-design an ecosystem that prioritizes equitable access to resources, capital and networks.

Technovation[MN]: Technovation[MN] provides technology and entrepreneurial opportunities for girls with the hopes of increasing the number of women in STEM fields. The organization offers a 12-week program that teaches girls how to build a mobile app that solves a problem in their community. Technovation[MN] recently received a two-year grant from Cargill to expand and continue its programming.

Genesys Works Twin Cities: Genesys Works has partnered with around 50 Minnesota high schools to professional skills and technology training to young entrepreneurs. Genesys was one of five Minnesota nonprofits to receive $175,000 in funding through the Google Impact Challenge. The organization went on to win an additional $125,000 as the people’s choice winner of the competition.